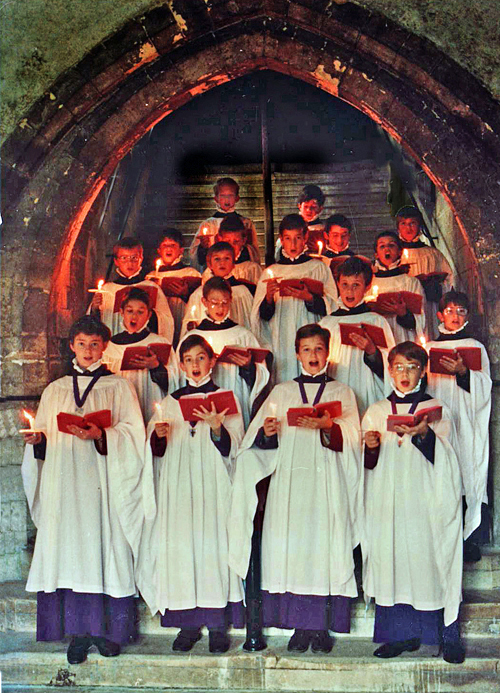 The Choir of Canterbury Cathedral, 1986. Dr Barry Rose invited me to shoot a series of pictures on the day they recorded the carol. (On ‘LP’.)

Earworm. This, I am told, is the correct name for that annoying scrap of music that insists on ringing in the ears and round and round the brain from the moment you wake in the morning until you fall asleep at night. You cannot stop it. One November morning in 1983 I woke to find I had an earworm. But mine wasn’t music. I am a lyricist, so my earworm was considerate enough to present itself in words. Two words. ‘Small wonder.’

And then I had a bright idea. I was in the middle of writing lyrics for a new collection of Christmas carols. Suppose I wrote one using the words ‘small wonder’? Might that stop it? I began writing. And so the carol No Small Wonder began to emerge. And, yes, the earworm stopped.

I wrote the three short verses about the wonders of the Christmas story. The crowd of singing angels! The strange star seen by the three wise men! The shepherd being told by the angels where the baby, Jesus, could be found! However, all through these three short verses there is a ‘but’. All these wonders were small wonders when you consider the astonishing fact that God himself was coming to Earth as a human being! Over all these lesser wonders came that one truly enormous wonder; no small wonder indeed.

The poem was written. I sent a letter to my dear composer friend, Paul Edwards, enclosing my poem. Paul remembers the day it arrived. He writes:

“I well remember Friday 18th November 1983, when the morning post brought Paul’s text beginning, “Small wonder the star. . .  I was on my way to the nearby ‘Washeteria’, so I took the verses and some manuscript paper with me to while away an idle hour. And so it was that No Small Wonder (op. 204) came into being.”

His idyllic composition knocked me out. I had never heard anything quite so lovely. It transformed the words. Not long after it was published by Animus it spread across the country and round the world. Cathedral choirs, small church choirs and choirs of many kinds embraced it. The BBC included it in its televised Christmas 2000 broadcast of carols sung by the Choir of King’s College, Cambridge. Animus tells me that this earworm-cum-washeteria production has broken their records

NOTE: Some internet references mistakenly refer to it by its first line, ‘Small wonder the star’. but the title remains, No Small Wonder.

Now see and hear the recording made in Paul Edwards’s own church, with Paul himself accompanying.