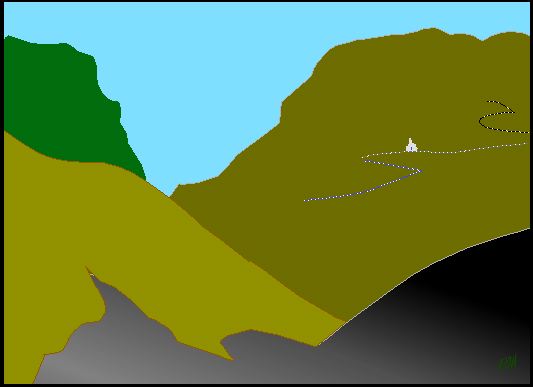 Photography can get you into trouble. It can put you in places you’d ordinarily never think of entering. It does things to you that have nothing at all to do with the camera. It can make you look an idiot. It can make you feel good. Consider the day that found me in near darkness inside a tiny Greek hillside church.

There are many churches in Greece but this one had a particular appeal for the photographer I had commissioned. And I had learned long ago that whenever the photographer wanted to shoot something it was always wise to agree. It produces better results. This time the photographer was the great Adam Woolfit. If ever you’ve opened The National Geographic you have seen his work. We knocked on the low, double doors.

A small, smiling and very bent old woman with a beautiful deeply-creased face let us in to the darkness. She stood for a moment and then disappeared into some back room.

It was very dark. The sunlight struggled in through the open doors, but it was sucked up and swallowed by the darkness until it barely existed. We waited for our eyes to become dark-adapted, but even then we could see only the dim glimmerings of ancient gold leaf and mere shadowy suggestions of colour.

Adam rubbed his hands together. ‘This I must do,’ he said.

He was now possessed, in the way that you are when something suggests itself and you see a way of actually achieving it. He opened the bigger of the two aluminium cases which came with us wherever we went, and pulled out a silver-coated roll of fabric sheeting, about five feet wide. He laid it on the ground outside the doors, silver side up, then unrolled it backwards into the church, half of it outside, half inside.

It was the standard reflector that every photographer carries on this kind of job. But what it did was extraordinary.

The Aegean sun bounced from it and flooded up into the dark church and it was as if a thousand spirits with candles had flown round the walls, lighting up every sparkling decoration, every silver, gold, red, blue, green glowing ikon. Every last piece of carved and polished wood shone as though with its own self-generated light.

Adam had just finished straightening it out to get full value of the sunlight when the back room door opened and the bent old lady re-appeared. She took one step in, then stopped. We watched her. Surprise is too mild a word to describe her reaction. Her jaw fell. She looked slowly up round the glowing ceiling, down the bright walls and ikons and eventually at us. We gathered later that she had spent nearly all her seventy-five years in caring for that church, cleaning, polishing, letting people in, locking up at night. Now, she stood still, caught in the middle of taking another step towards us. Then her face broke into a smile, crumpled into tears and she came to us, arms outstretched.

It was the first time she had seen sunlight in her church.