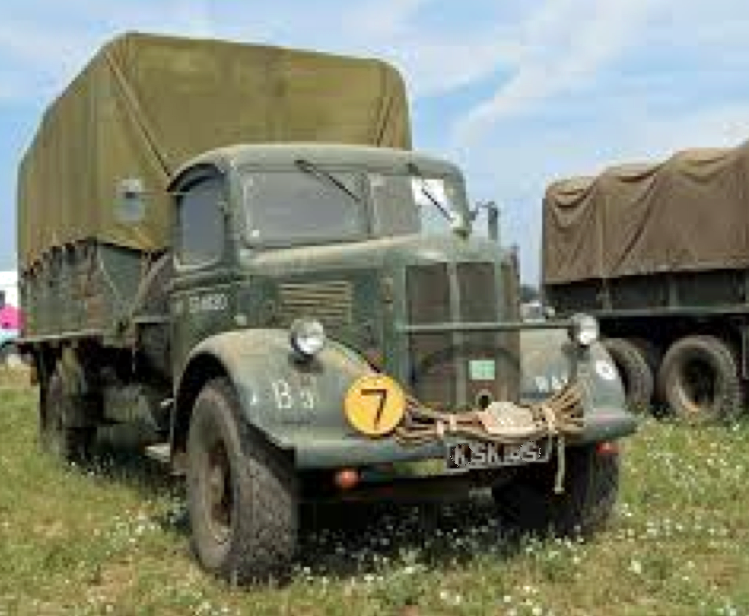 I once broke five RAF laws in five minutes. And got away with it. I was in Calcutta, waiting for repatriation orders to materialise and stationed temporarily on an RAF Maintenance Unit. I had nothing to do while I waited so, having noticed a dump truck doing nothing useful I decided it was time to teach myself to drive. I got the keys, jumped on and drove it round and round the yard.

I mastered the niceties of clutch movement, brakes and so on and, before long, someone noticed me doing it and, supposing that I was a registered driver, asked me to take some heavy gear over to a nearby RAF station airfield. They said one of the 3-ton Dodge trucks would do and gave me the key.

So, I was now a registered driver. Eventually the call came to take a crowd of men on a ‘liberty run’ into the city for an evening, and then pick them up later and bring them back.

I filled up, and the men got on board. There seemed to be a lot of them, but who was I to argue? I took off and, with the ten miles of dead straight Grand Trunk Road ahead and a lot of singing behind, I joined in and went faster. The windows were down and the effects were cooling.

Then in my mirror I saw an RAF Police jeep gaining on me and gonging.

I stopped. One of the red-capped men wandered round to the back of the truck and the other came up to my window. The conversation, with its obligatory police opening for these occasions, is inscribed on my memory.

‘You were travelling at sixty miles per hour.’ He made a note in his book of Charge Sheets. ‘You’re on a charge. Now, show me your twelve-fifty, Airman.’

My 1250 Identity Card was in the top pocket of my shirt, and my shirt was hanging over the back of a chair, and the chair was by then three miles behind me. In response, I possibly spread my hands.

I told him about the chair, and he noted it.

‘And where is your Unit, Airman?’

This I now knew to perfection and, proudly, told him. ‘325 Maintenance Unit, Bally.’

He held out his hand. ‘Your Journey Form, Airman.’

A Journey Form is the slip of paper given to a driver at the beginning of a trip, naming the home unit, destination, purpose of journey, the time and date of issue and the tachometer reading. It is signed by the NCO in charge of the unit. I remembered having it given to me when I collected the keys for the truck, but from then on my memory of it was the customary blank. I felt in my shorts pockets and looked all round the cab. No Journey Form. The fact was recorded.

‘OK. You’re on another charge, Airman.’ Then he looked pointedly at my bare chest. ‘It is also an offence to be improperly dressed on duty, Airman.’

To be properly dressed meant Air Ministry Issue clothes. When in public it was always wise to wear Air Ministry Issue clothes, or at least clothes that resembled them closely. But Air Ministry clothing was sturdy but uncomfortable. Shorts put one in mind of canvas. Socks were knee-length, woollen, dyed khaki and felt like blankets. Shoes were sensible black leather. Hats were hard sun helmets with a vent at the top, a bit like a recumbent breast with an inflated nipple. (In Burma we were given a refinement of this: a bush hat. Studying snapshots of the time I cannot decide which looked the more ridiculous.) After about six weeks in India your elders and betters advised you in matters of clothing and directed you to the dhurzi in the bazaar, who would run you up natty little numbers in cool cotton. On this morning I wore no hat, no shirt and no socks. Just a pair of shorts made by Ahmed’s Splendid Bespoke Tailors of Calcutta. I could understand the sergeant’s concern.

‘You’re on another charge, Airman.’

As he noted all this he was joined by his colleague who muttered a few words in his ear. There came a light in his eye. He must have felt he was approaching some kind of record.

‘Airman, my Corporal tells me you’re carrying fifty men in this vehicle. That is twenty men over the Air Ministry Regulations maximum quoted for this particular vehicle.’ (Don’t quote me on these statistics. The exact numbers escape me but these give you the general picture.) ‘So, another charge, Airman.’ He made a note on the Charge Sheet, which by now had reached Page Two, and took a final look round the cab. The two then moved away to talk privately.

He came back, put one foot up on the step and leaned in at the open window with the air of one who has a difficult subject to discuss and wishes for there to be no misunderstandings or hard feelings.

‘Now,’ he said, and actually smiling, ‘the thing is this. When I stopped you I was running my Corporal into the city. And,’ he looked at his watch, ‘I’ve got to get back to the Unit now, so -’

He paused, and scratched his chin in the manner of one who is waiting for some recognition of his likely intentions. In its absence he made up his mind, and winked.

My stare of pained disbelief must have impressed him. He looked at his corporal, his book of charge sheets and back at me. He shrugged, opened the book, tore out the two pages of charges he had just filled in and, with the carbon copies, tore them up, rolled them into a ball and threw them into the trees.

I took him, and all fifty-two of us sang all the way to Chowringhee.