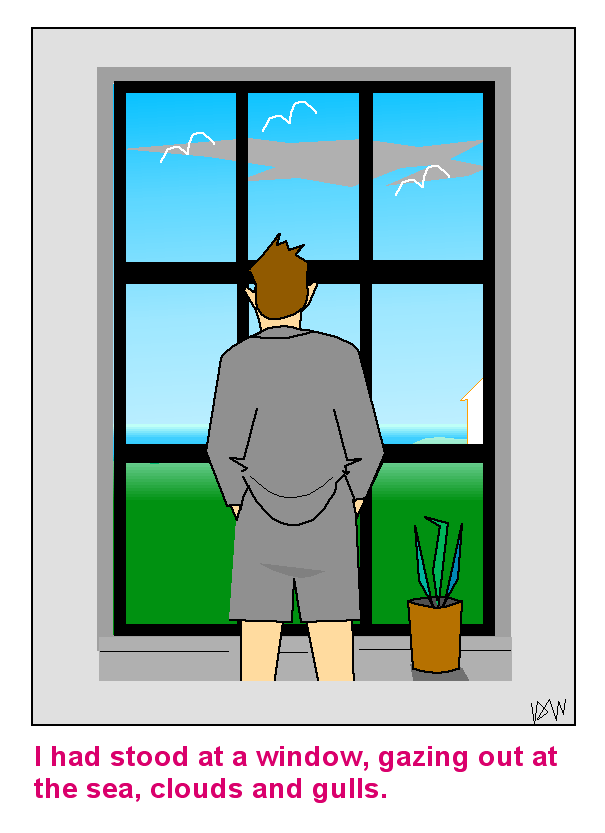 One reader is interested to know how I began writing verse. It began close to the onset of adolescence, that grim time of pink spots and sudden urges. The family was on holiday in Port Isaac, Cornwall. It had been a favourite place for many years. While waiting one morning for my parents to get themselves ready to go down to the beach, I had stood at a window gazing at the distant sea, clouds and gulls and simply thought it would be fun to write a little rhyme about it. It never got further than:

I kept it for years. I was proud of the tattered rags. From that time onwards I have found that completing a satisfactory bit of verse is the best tonic around. Putting words together in an unusual and sometimes enigmatic way can be like walloping a ball at table tennis and seeing it strike the last half-inch of table: you feel unbelievably good.

The actual production of work didn’t start until my early teens, and it was always nonsense sparked off by things happening – and always for showing it off to an immediate audience, more often than not those who were involved in what had happened. I could never keep it to myself; that wouldn’t have made sense. I was essentially a performer, very proud of what I wrote and anxious to give others the benefit of my brilliance.

This was the limit of my output until my my early 30s, when more substantial stuff emerged. In my forties and onwards it became more thoughtful, but still usually influenced by a place or an experience. And it has only today occurred to me that my ‘tattered rags’ were the beginning of it all and they were now showing their face and asking me where the hell I’d been for a couple of decades.

Some time in the 1970s my church Choirmaster, David Iliff,  a founding member of The Jubilate Group, came up to me after Morning Prayer and said he had just realised that very little existed in the hymnbooks about St Paul’s ‘fruits of the Spirit’ in his writings to the Galatians (Galatians 5:22). Would I have a go at writing something about it – something that could be turned into a hymn? In a few weeks’ time?

The eventual hymn, which is in the form of a prayer, was set to the existing and wonderful tune, Lavendon, by the composer and friend, Paul Edwards. It began:

And that was the beginning of hymn-writing. Since then some 80-90 have been published in half a dozen or so books. For many of them the composer John Barnard has been responsible for both pointing out the need for hymns on certain subjects and composing the music. His compositions are frequently heard in radio and TV broadcasts of church services. One small highlight: I once asked Sir John Betjeman, whom I had come to know fairly well, if I might use the first line of his poem Christmas

in a new hymn I was writing. Generously, he said ‘yes’, and it became the title.

In 1981 I completed the cantata Samuel! for the Royal School of Church Music in Montreal. The composer was Dr Alan Ridout of Canterbury Cathedral and one day, during a rehearsal break, the subject of poetry came up and he asked to see what I had written. A week or two later back in England I put it all in a brown paper parcel and sent it. He replied, saying he liked it and suggested that I meet John Bishop of Autolycus Press. He might very well publish them. I did, and he, having read them, came to see me. He said he wanted to publish.

I was stunned. Me? Published? We began discussing suggesting the design of the book, typography and so on. During the chat he surprised me by saying, ’Did you realise you mention trees an awful lot?’ I did not. He said, ‘I want to break it into two books, one for the trees and the other for the autobiographical sort.’  There was more chat. As we shook hands on our Pinner doorstep I said, ‘It’s funny about the trees, isn’t it.’

That phrase stuck with me and, in the lovely setting of Lady Betjeman’s Hay-on-Wye home where I was house-sitting while she was in India, I sat down and wrote the poem, It’s funny about the trees. I sent it to him and asked if he would like to add it to the collection. He did, and the phrase became the title he gave to the book. The second collection became A Suburban Boy.

In a couple of months, they were published. Most of them were sold at my readings in local church halls and schools. During the intervals and at the end of the readings our daughter Jane and I were at a table somewhere at the back; Jane did a brilliant job of the selling and I signed each copy purchased.

A friend’s comment after he’d read them suggested that in fact my work was largely pastiche Betjeman. I bridled at the thought. Me? Imitating someone else’s style? But he was right and my only consolation is that even respectable and famous poets and musicians have at least begun by copying the style of their own personal favourites. Me, I just carry on doing what I’ve always done.

Eventually a lot of Christmas carols emerged. It is a glorious subject to write about. One of the most frequently sung is No Small Wonder and it actually began because of a mental tic.

In November 1983 I had that annoying experience, suffered by most people now and then, a short, everyday phrase repeating itself in my head over and over again. The phrase was simply, ‘small wonder’. Someone must have said it within my hearing. I longed to be rid of it. I wondered if just writing it down over and over again several times would do it. So I tried it. The sheet of repeated words made me aware of its simple waltz-like rhythm. (Try saying ‘small wonder, small wonder, small wonder’ aloud, keeping a steady, regular beat.)

And in the hazy, stumbling process that is fancifully called ‘inspiration’, a poem emerged.

On November 18 and fairly pleased with the result I sent it to the composer and a good friend Paul Edwards. He wrote shortly afterwards, enclosing his setting. He said my letter and poem had arrived just as he was about to take his laundry to the local launderette, so he had taken it with him, plus some manuscript paper. After putting his clothes into the machine he had sat down opposite it, watching the contents going round and round as he worked on a tune. And that lovely tune emerged, shining. 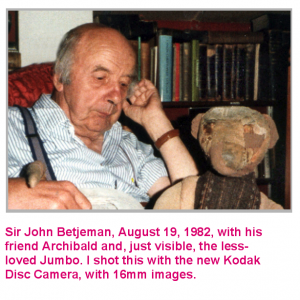 No Small Wonder seems to have been well-liked from the time it was published; it became the Publisher’s best-seller; the Choir of King’s College, Cambridge performed it for BBC Television at Christmas 2000 and my Performing Rights Society records show that it is being recorded and broadcast from cathedrals and churches round the world every Christmas.

Then, in 2008, I had the excitement of discovering that the BBC Music Magazine had conducted a poll among cathedral choir directors, organists or composers, asking each of them to name five of their favourite Christmas carols, ancient or modern. Out of the 50 carols chosen, both well-established and modern, No Small Wonder was 19th.

One evening while I was reading to Betjeman from one of his favourite writers, Harry Williams, he interrupted me as I read, and said, ‘You know, I can see you’re a poet.’

Now, that sort of thing does wonders for a man, and especially for introverted, inveterate braggers like me.