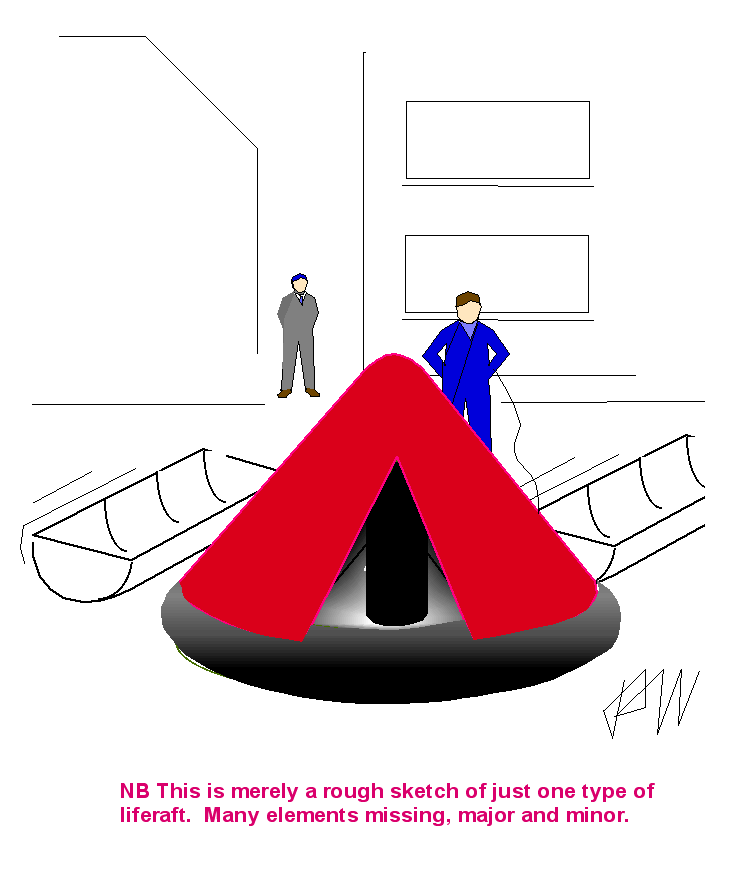 Now, watch out. That casing’s going to blow apart. OK?’  I stood clear. The youngish man in a boiler suit was holding a length of cord attached to a white, barrel-sized cylinder. He gave it a sharp tug.

There followed the sound of an enormous beast breaking wind and the cylinder flew apart. From inside there appeared a swiftly-growing vertical black pillar supporting a bright red tent. This was surrounded by a black ring of inflating black rubberised canvas.

This was my first day at a new job with the RFD Company in Godalming, Surrey. What I was looking at was an inflatable liferaft for ships and aircraft.

Moving to a new job was old hat. By the time I was 30 I had moved to six, so I was experienced. Each of them had been either the learn-it-in-a-day sort or requiring knowledge I already possessed.

But moving to this one was different: I knew absolutely nothing about the subject. It was an entirely new field. And I had to write instruction manuals about it.

I had accepted this technical representative,author job because I was becoming bored with the current one. Although it was thirty miles away from home and meant moving house it required the writing of technical stuff about the design and maintenance of lifesaving equipment. Liferafts, lifejackets. Things that saved you from drowning. And this, I felt, would be good. I would start learning from day one and work hard at learning the lot. I was enthused. I might even have rubbed my hands.

My girlfriend and I had just married. We had moved to Guildford, only a few miles from the factory. Much nicer than Hendon. We spotted a detached house at the end of a close. It had just been built. This, we knew, was going to be good.

I learned all that I needed to learn about the operation and plunged into the writing. Technical authors who are newcomers to a subject usually do a good job because they instinctively write from the user’s angle. So many instruction publications are written by those to whom the whole thing is old hat. I gathered I was conforming to type and giving satisfaction. I engaged a secretary. Very efficient, she was.

And then I discovered something else.

The representative for one of the design agencies I used was keen and anxious to please. One morning we had just completed a briefing when he invited me to have lunch with him at a small restaurant in the village.

Now, this will sound ludicrous: in fifteen years of working life I had never been invited to a business lunch. This might of course have been due to bad breath or some unpleasant habit of which I was unaware. But here I was, here he was, and off we went.

It was pleasant in the little, low-lit room. Quiet and inoffensive music, a scattering of customers, brisk waiters, crisp linen. My host asked which wine I would like, red or white. I did not know. I had tasted wine now and then when pressed by those older and wiser than I, but that is all. Tentative halves of cider on holiday had been my limit. I chose red and wondered how it would taste.

Conversation grew more relaxed. Surroundings became evanescent. The pudding was delicious but I couldn’t remember choosing it. We ended the meal and, on the way out, I had the impression that I was not having to put any effort into either propulsion or steering. Tables simply moved apart as I approached, the carpet slid backwards at every step, the doorway to the street widened as the tide upon which I floated carried me through it.

I had discovered what it is to be slightly, pleasantly, drunk.

NOTE: I’m grateful to our very good family friend from Guildford days, Roger Lake, for sending me a Surrey Advertiser cutting announcing an exhibition to be held next year in Godalming Museum, presenting the story of R F Dagnall and the history of the RFD Company. It seeks contributions from all who once worked at RFD. It was this cutting that prompted me to write about my own few years with the company.

For those who won’t be able to manage Godalming, here is the gist of a cutting from the magazine Flight for November 1942. It is their obituary for Reginald Foster Dagnall. He was born in London in 1888. He developed a fascination for the design and construction of small airships. In 1920 he formed his own company, RFD Ltd, Godalming, in the design and manufacture of pneumatic dinghies and barrage balloons. He died on November 16, 1942. The company later amalgamated with the Beaufort Company and is now RFD Beaufort.