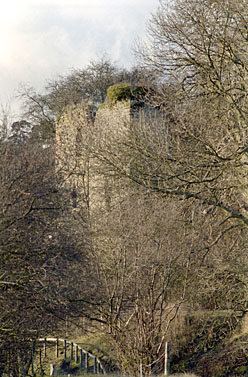 It is an ancient site. If you walk up on to the mound that rises toward the east of the castle in Moor Lane, you are standing on what is almost certainly the fortress held by Edward the Elder in 921. NB: All photos taken before the English Heritage restoration work.

When the Duke of York won the Battle of Mortimer's Cross in 1461, his base was probably Wigmore Castle near Leominster. Vikings attacked the Anglo-Saxon fortress and were defeated. At that time, the present village was called 'Wigingamere.' The name probably derived from 'Wicga's Moor,' or possibly the Welsh, 'Gwig Maur,' meaning 'big wood.'

Inevitably, Roman remains have been found on the site, too. The square shape of their camp can still be seen near Bury Farm, to the east, on what is the western branch of Watling Street.

In 1086, the Domesday Book records 'Wigemore' Castle as being built by William FitzOsbern and held by Ralph de Mortimer:

'Ralph de Mortimer holds WIGEMORE Castle. Earl William built it on waste land which is called MERESTUN, which Gunfrid held before 1066. Ralph has 2 ploughs in lordship and 2 hides which pay tax, and 4 slaves. The Borough which is there pays £7.' 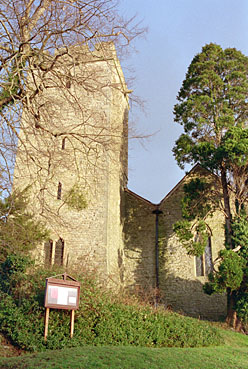 The present castle is mainly 14C, but parts of the shell wall are Norman and the NE tower is 13C. It is almost certain that it was from the castle, on February 3, 1461, that Edward, Duke of York, marched his troops to the Battle of Mortimer's Cross and claimed victory. The following year, he was crowned King Edward IV. English Heritage have recently spent one million pounds on preservation and archeological work.

In 1772, Wigmore was one of the first parts of England to have an Enclosure Act. It affected the moor and the woods. The dividing earth banks still survive.

The Church of St James was built shortly after the Norman Conquest and little, apart from detail, has been added since the 1330s.