I‘m afraid, for this bit of fun, the reader has to know something about Charles Wesley, the English hymnwriter of the 19th century, and in particular his love for – and his extraordinary skill in using – the English language. In his well-loved hymn, ‘O thou who camest from above’ he uses the word ‘inextinguishable’. At first sight it looks unsingable. Then you find that, with absolutely no effort, you’ve just sung it. Wonderful.

I t was 1948. I had just sailed home from RAF service in India and needed to do something quite barmy. I suggested to my friend John a cycle trip to Paris. He asked if I was feeling OK. I said I was and what about it? We went. Off the Calais Ferry and on to towards Paris, we came to a magnificent straight, narrow road, lined with tall and magnificent Lombardy Poplars (a far more lush and lavish sight than in my drawing). Somewhere around the Bethune region my barminess struck and I sang out to John, ahead of me, ‘Lombardy Poplars in Picardy Lane!’ He swung round in his saddle and repeated the words. This duet lasted for the next half mile.

In the comforts of Paris we mellowed and became ordinary layabouts again: with our bikes in the Guard’s van, we boarded the Calais train. 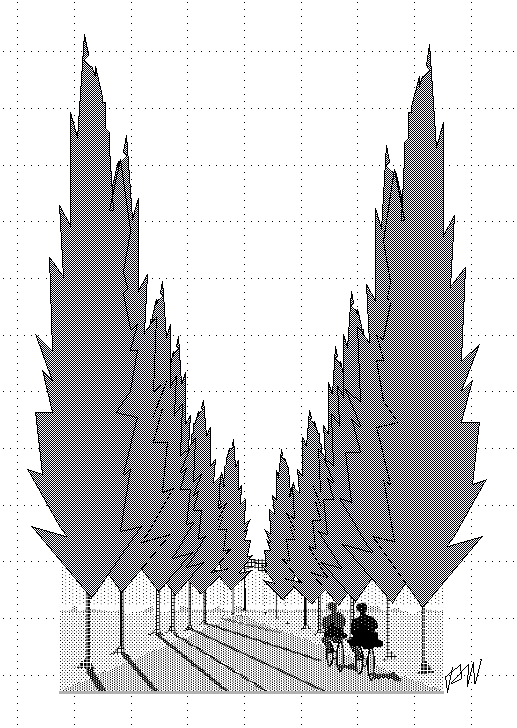 There has been much about meat pies in the Letters page of our newspaper recently, not so much about their possible equine content as about the revolting sight, sound and smell of someone sitting next to you on the train or bus and eating one. I can sympathise. Until it closed a few years ago we had a factory along the road, and shift workers made the most of the nearby shop where hot meat pies were served. The ideal breakfast, it seemed, was hot meat pies, and eaten en route to their workplace.

One of the most unnerving things that can happen to you is to come face-to-face with a stranger who, unsmiling, looks you in the eye and says, ‘Remember me?’  The brain’s finder races up and down the years, scanning rows of faces, sounds of voices, images of places.

I was well into my forties when, one afternoon, the front-door bell sounded. Standing there was a hefty, moustached stranger of about my own age and looking distinctly unfriendly. He held up a delicately shiny-covered book and flapped it at me.  It was my own recently-published book of light verse.

‘You write this?’ The words were growled.

‘Well, see this?’ He had been marking a page with a forefinger and now he opened the book, rubbed the finger across a poem and then pointed at a word. ‘See? That’s me.’

I took the book from him. It was a poem about a boy who had sat at a desk in front of mine at school – one of those schools known in the 1930s as ‘council’ schools, providing free education in reading, writing and arithmetic. The boy was one of a group greatly to be feared by all. They would select someone smaller or quieter than themselves and deal with him in what they considered to be the most amusing way. Late one autumn afternoon at the end of school, two or three of them slipped out before anyone else and hid behind the high wooden fence on either side of the school gate. Above was an enormous horse-chestnut tree whose dead leaves and conkers covered the ground. As boys came through the gate, each one felt the knobbly end of a long and sturdy chestnut stalk being whacked with considerable force on top of his head. Those stalks can hurt. I can vouch for it.

At home, I told my dad what had happened. He’d heard many of my tales about the gang’s little ways. At the end of school the following day I approached the gate carefully and covered my head with my hands. As I dashed out to the pavement I heard from behind me a boy’s yowl and curse. Dad was there and delivering a smart bit of handwork to both boys, followed by a brief caution.

In the book, which I now handed back to him, the story was condensed to a brief comic poem, the boys being carefully provided with false nicknames.

My mouth was dry as a haystack. This was going to be nasty. I could still manage a nice uppercut to the jaw but did not exactly relish the prospect. I managed a cheery, ‘Well, well, well! So you were one of them?’

He nodded, and gave me a wide grin. ‘Anyway, you all right, then?’

Do you have a personal story you’d like to tell? I recently discovered a website that invites you to write a short article about a special day in your experience. The theme is, ‘Went the day well?’ The article can be prose or poetry, factual or fictional, serious or light-hearted. Have a look at this. Good luck!