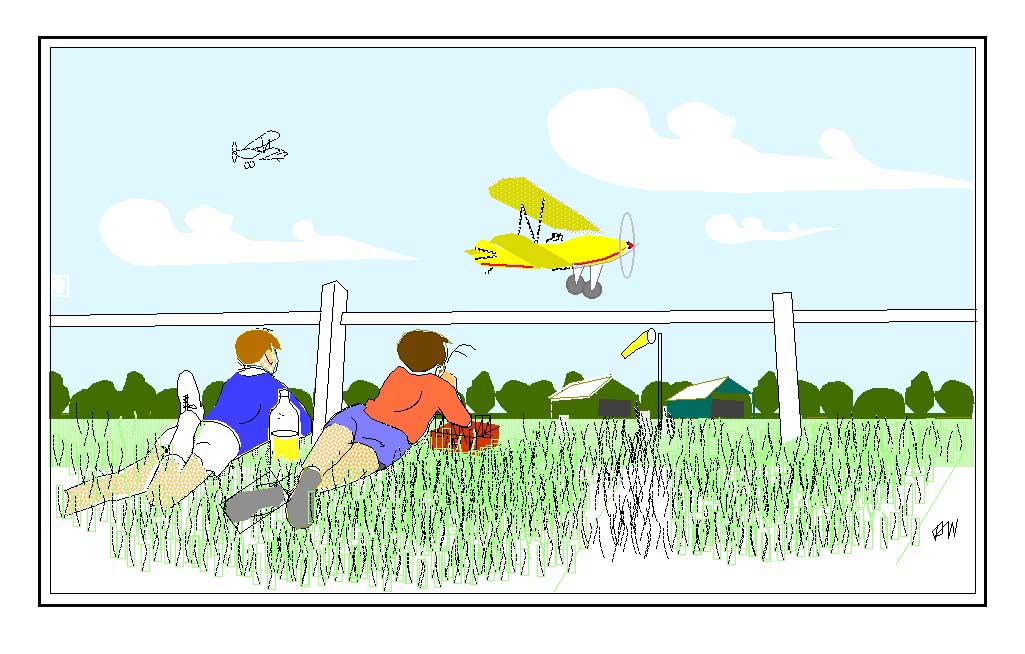 Ever heard of it? Elstree? In 1937 it was a village a couple of miles east of Watford, Herts. It had a golf club and an airfield – and a batch of film studios, where many internationally famous titles were produced. Heard of ‘Star Wars’? Yes, the studios are still very much in Elstree – and so is its airfield. Have a look at this and then at this and you will see the way things are nowadays.

In the late 1930s my friend and I loved the place. The airfield, I mean. It was ours. Have a look at my illustration above and you’ll get a fair idea of what it used to be like (although I can’t guarantee the authenticity of those two sheer-guesswork hangars on the right.) Just a couple of hundred yards away to the South the enormous Elstree Reservoir spread itself; it’s still there, re-named Aldenham Reservoir but as beautiful as ever. It is a reservoir yet, to all intents and purposes, it is a lake.

Every Saturday afternoon we’d be off to it, this favourite hideout of ours, Elstree Airfield. Naturally, this came after the shoe-cleaning and general helping-Mum jobs were done. My friend would appear with his bike at our Bushey back door with ‘Anyone home?’ and we’d be off, standing on pedals, swerving round the bends of Little Bushey Lane on the two or three-mile trip to this very small but active flying field. One game on the journey was to count the number of vehicles seen (anything except bikes), guesses being made before we started. The highest ever would have been around ten.

From our grassy vantage point by the side of the lane we would watch pilots taxiing round to the end of the (then) grass runway or approaching from far off among the clouds and preparing to land. Some of the pilots were trainees and, being the experts we were, we would judge the quality of their landings and take-offs and give points and make notes. We gave them 10 points to start with. Every bounce lost a point, every lopsided one-wheel touchdown lost another.

Aircraft and flying were our hobbies. Both of us had, in our bedrooms, a cotton thread tied at one end to the high curtain rail and down to a low anchorage on the other side of the room. At the top of the thread dangled a model aircraft. One light twitch on a release line freed the aircraft to glide down beautifully across the room to an admittedly sudden and graceless landing. Books on flying, pictures of aerobatics, jigsaws about aeroplanes – both of us could claim to have a real bedroom.

Watching aircraft in real life was better, though. There was always the (unspoken) possibility of a mishap and seeing the pilot leaping from the cockpit and floating gently to earth under his parachute. And the lemonade-and-snacks, the occasional whiff of exhaust,  the sounds  – the companionship of two people enjoying the same things – all this made it a treasure. Elstree Aerodrome today is, I’m sure, wonderful. But I don’t think I want to go and see it.

NOTE: For those who are interested, like many other illustrations in these musings, the sketch was made entirely on computer with the long-defunct Apple program called ‘ClarisWorks.’ I ask myself what made Apple throw this gem overboard? PW.